Demonstrating Honesty and Integrity – Doing the Right Thing Every Day 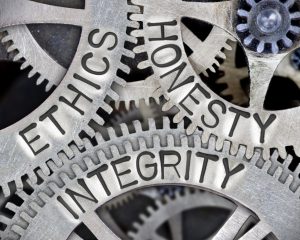 Imagine this: You’re called to a customer’s home because the HVAC system isn’t blowing at maximum capacity. After troubleshooting, you realize the fix is simple – a replacement air filter. For some HVAC professionals, the easy fix creates a dilemma: make the replacement and be on your way or exaggerate the problems to ensure that the repair is complicated and costly.
Clearly, the right answer – replacing the filter, ensuring the system is running properly and moving on – is also the ethical one. In an industry that can invite shady business tactics, honesty and integrity must be guiding principles. HVAC businesses that stretch the truth, overstate problems and concoct malfunctions are asking for problems.
The truth of the matter is that integrity and honesty go hand-in-hand – acting with integrity means living honestly and living with honesty showcases integrity. As a professional, integrity and honesty means:

Lies and deceit will eventually come back to you. Practice truthfulness at all times.

Concentrate on the task at hand and resist being distracted on the job.

Be on time. Come in on budget. Fix mistakes. Build a reputation of delivering on promises and keeping commitments.

Treat employees with courtesy and consideration. Show you care.
At the EverRest Group, we urge contractors to operate under strict standards that emphasize honesty and integrity as founding principles. Using EverRest’s Five Critical Components of Success, HVAC companies can earn 20% profits without high-pressure or dishonest sales tactics.
Looking back at the earlier example of honesty and integrity, we can see how technicians win new customers by doing the right thing. Even though the repair in the example was simple (a new air filter), the technician followed EverRest’s lead-generator tasks to be sure that the system was running smoothly.
The lead generator tasks include:

After a full inspection, the technician may not come across malfunctions that meet the mandatory lead standards. However, technicians should be aware of secondary lead conditions, or conditions in an HVAC system that have the potential to cause problems, such as:

In both the mandatory and secondary lead conditions, a supervisor can discuss with the homeowner the advantages of replacing the system versus multiple repairs. The tried-and-tested verification process leaves homeowners with the satisfaction of knowing their system has been thoroughly inspected. Homeowners don’t feel scammed or cheated. They aren’t being duped into spending money.
The process also leaves HVAC technicians and HVAC company owners feeling proud. They worked to the highest ethical standards, never misrepresenting themselves or falsifying facts. They know they have earned 20% profits using honesty and integrity.